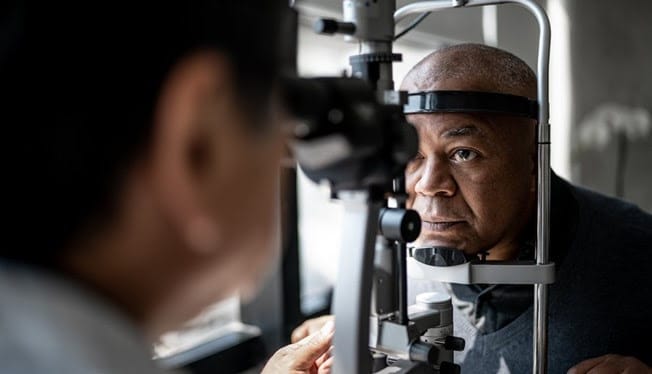 Only an eye exam can pick up most early signs

The facts about glaucoma can seem a little scary: It’s the second leading cause of blindness worldwide, affects about 3 million Americans and becomes more common with age. Yet half of the people in the United States who have glaucoma don’t know it, according to the federal Centers for Disease Control and Prevention (CDC).

One big reason so many people are in the dark: In its most common forms, glaucoma has no symptoms until the damage is well underway. In a typical case, the optic nerve at the back of the eye, which sends visual information to the brain, becomes more and more damaged over time, often because of high pressure in the eye. The damaged nerve fibers slowly eat away at peripheral, or side, vision — something people rarely notice.

“It’s almost always silent,” says Shivani Kamat, M.D., an assistant professor of ophthalmology at UT Southwestern Medical Center and a spokesperson for the American Academy of Ophthalmology. “A lot of people don’t notice vision loss themselves until they’ve lost over 50 percent.”

One reason peripheral vision loss is so sneaky is that our brains tend to “fill in” the missing picture parts, says Thomas Brunner, president and CEO of the Glaucoma Research Foundation.

Only in its advanced stages does the most common type of glaucoma, open-angle glaucoma, affect central vision, which is needed for reading and many other daily tasks.

But the best way to detect most early signs of glaucoma, along with other eye problems, is to get regular eye exams, according to the ophthalmology academy and the American Optometric Association. The U.S. Preventive Services Task Force says more research is needed on screening for glaucoma.

The American Academy of Ophthalmology recommends that all adults have at least one comprehensive eye exam by age 40 and regular exams after that. People over age 65 should get exams at least every year or two, the group says. But eye doctors may urge people at high risk to get exams earlier or more often.

African Americans over age 40 are at particularly high risk for glaucoma. Overall, African Americans are six to eight times more likely than white people to get glaucoma, according to the CDC. Other risk factors include diabetes and a strong family history of glaucoma, it says.

“We generally tell patients that if they do have a family history, [especially in] a parent or sibling, their risk of developing glaucoma may be 10 times greater than if they did not,” says Thomas Samuelson, M.D., an eye surgeon and an adjunct professor of ophthalmology at the University of Minnesota.

Whether you get your eye exam from an ophthalmologist (a medical doctor) or an optometrist (the eye health professional many people see for routine care), the exam should include several steps that might pick up glaucoma warning signs. These include tests for:

If warning signs show up, you may be referred to a specialist for more tests, Kamat says. Some people may hear that while they don’t have glaucoma, they are “glaucoma suspects,” meaning the appearance of their optic nerve or their eye pressure is worrisome enough that they need to be followed closely for a while, she says.

The other kind of glaucoma: Know the signs

In open-angle glaucoma, the most common kind, the openings of drainage canals at the front of the eye appear clear, even though the canals may be clogged farther down, allowing fluid to build up and pressure to rise. But in angle-closure glaucoma, those openings are partially or fully blocked by the bottom edge of the iris, the colored part of the eye. This less common condition can develop slowly, with no immediate symptoms, much like open-angle glaucoma. An eye exam can pick up signs of blockage, along with any optic nerve damage, Kamat says.

But sometimes a blockage develops suddenly and “the eye pressure goes up very rapidly,” causing dramatic symptoms, Kamat says. This is called acute angle-closure glaucoma, and it’s an eye health emergency, she says. The symptoms can include:

If you have these symptoms, your vision is at risk and you should go to an emergency room, Kamat says.

What happens after diagnosis?

If you have open-angle glaucoma, with or without high eye pressure, the first treatment will usually be medicated eye drops that lower pressure or a laser procedure to improve drainage. Laser treatments, which must be repeated from time to time, can reduce or eliminate the need for drops in some patients, so they are increasingly used as initial treatments, Samuelson says. Another, newer option, he says, is an injected pellet of medication that can last for up to six months.

When those approaches don’t work, surgery to open the drainage canals or implant a tiny stent may be the next step, he says. These surgeries can sometimes be done at the same time as needed cataract surgery, he adds.

People with angle-closure glaucoma also benefit from laser procedures and surgery, Samuelson says. A laser can be used to create a small hole in the iris and improve drainage. Cataract surgery alone also can help improve drainage, he says, because it involves the removal of an often-thickened lens that sits behind the iris.

Treatment is crucial, because as glaucoma progresses, the loss of side vision can get in the way of everything from driving to walking down stairs, Kamat says. Loss of central vision is even more disabling. Once vision is lost, it doesn’t come back.

Brunner says that no treatment cures glaucoma, but with effective management, “most people with glaucoma never go blind.’’